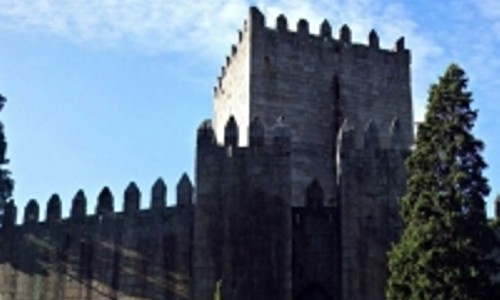 Guimarães is one of the most important historical cities of the country and its historical centre is considered World Heritage making it one of the biggest touristic attractions in the entire region.

To happen in Guimarães !!

What to visit in Guimarães

In the middle of the tenth century the Countess Mumadona Dias had a monastery built. With constant attacks by the Moors, he decided to build a fortress to protect the monks and the Christian community that lived around him. Thus appears the primitive Castle of Guimarães. In the twelfth century, Count Dom Henrique and Dona Teresa came to live in Guimarães Castle and Dom Afonso Henriques was probably born there. After its defensive function, the Castle enters a process of abandonment and progressive degradation until the 20th century, when it is declared a National Monument and restoration works are carried out.

Free entrance, in the castle however the access to the Tower of Menagem will have the cost of 1.5 

Schedule: Open every day from 9.30 am to 6 pm. Closes on the following holidays: 1 January, Easter Sunday, 1 May and 25 December.

Chapel of S. Miguel do Castelo

According to legend, here was baptized the first king of Portugal, Dom Afonso Henriques, which seems to be unfounded, given the temple dating from the thirteenth century. Nevertheless, the presumed baptismal font that was used in the ceremony is kept here.

Schedule: Open every day from 9.30 am to 6 pm Closed on the following holidays: 1 January, Easter Sunday, 1 May and 25 December

Palace of the Dukes of Bragança

It was built in the fifteenth century by Dom Afonso, the first Duke of Bragança. In century XIX was converted into barracks. In the middle of the 20th century, after a period of abandonment, it was restored and later converted into a Museum, housing a seventeenth and eighteenth century estate. The palace also performs the noble function of official residence of the President of the Portuguese Republic on the second floor, during his travels to the North of Portugal.

Schedule: Open every day from 9.30 am to 6 pm Closed on the following holidays: 1 January, Easter Sunday, 1 May and 25 December

The street of Santa Maria was one of the first open streets in Guimarães (12th century). It was intended to be a link between the Santa Clara convent (now Guimarães Town Hall) in the lower part and the castle situated in the upper part of the village. Along its route we find several architectural testimonies of its past: Casa do Arco (nº28), Casa dos Peixoto (nº39), the Gothic House of Valadares de Carvalho (nº9), the House of Carneiro that now houses the Municipal Library Raul Brandão (nº58) and many others that give a proper and characteristic identity to this city.

In this square was a small chapel of the seventeenth century dedicated to Santiago that was demolished in the late nineteenth century, it is still possible to locate it in the square, once the design of the pavement with granite slabs marks the location of the old chapel. Plaza de Santiago is now a friendly place at any time of the day. In it you can walk and enjoy the various esplanades of the commercial establishments. At night it is pleasant due to the amusement provided by the establishments that make the square one of the main places of meeting and conviviality between the inhabitants and visitors.

In this beautiful square you will find the Nossa Senhora da Oliveira church completed in 1387. Besides the Church, you will also see the Salado Pattern, a historical monument and unique in the country for its shape and architecture. According to tradition, it recalls the victory of Dom Afonso IV on the Moors, in 1340, in the battle of Salado. It is also worth mentioning the Domus Municipalis, an imposing monument that was the palace of the Municipality in the end of the fourteenth century, highlighting the porch supported by five Gothic arches, five balconies and a statue on the façade of the building that represents Guimarães.

Monte da Penha is the highest point of Guimarães and from its top, where a statue of Pope Pius IX is located. It is possible to reach magnificent views that can extend to the ocean. Monte da Penha has several facilities: a camping site, a mini-golf course, a mini-train, an equestrian center, walking areas, picnic areas, monuments, grottos and belvederes.

You can reach Monte da Penha by car which is 6 km from the historic center, or you can go by cable car which is 1.7 km from Largo das Hortas (5 minutes walk from the city center).

The Citânia de Briteiros is a group of impressive ruins of an important town inhabited in Protohistory, more than 2000 years ago, in a