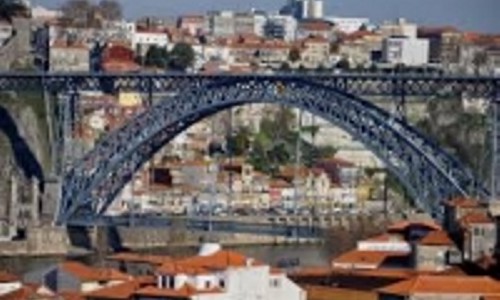 Renowned by its wine, its bridges, contemporary and historical architecture. the historical centre of Porto is considered World Heritage by UNESCO.

What to visit in Porto

Avenida dos Aliados is the center and heart of the city of Porto. At the top of this avenue is the beautiful building that houses the Oporto chamber. When descending to the Ribeira, take a short detour through the São Bento railway station and enjoy the beautiful tile panels.

The Clérigos Tower, with a height of 76 meters, was the tallest building in Portugal at the time of its construction (between 1754 and 1763), and is still the highest tower in the country. It served for a long time as a lighthouse for the ships that entered Porto, since then offers visitors the highest panorama of the city, the Cathedral of Porto, the Douro and the cellars of Port wine.

The construction of the Cathedral began in the early 12th century and was only completed during the 13th century. The Cathedral was fortified to protect the city from the invaders. The windows are very narrow and let pass very little light, the main chapel was fully rebuilt in the eighteenth century.

Palace of the Stock Exchange

The palace of the bag is for me the most beautiful monument of Porto. Built in 1862 in neoclassical style and inspired by the Moorish style, it was destined to be the headquarters of the Porto Commercial Association. During your visit you can not miss the Patio das Nações and the magnificent Arabian Hall.

Classified as a UNESCO World Heritage Site since 1996, Ribeira is the most emblematic neighborhood and the historical center of the city of Porto. Stroll through the narrow streets to discover the charm of this site. At the Ribeira dock you can admire the Dom Luís I bridge built by the engineer Théophile Seyrig, a disciple of Gustave Eiffel.

On the other side of the river Douro, in Vila Nova de Gaia, there are more than 50 wineries of Port wine. If the wine has the name of the city is 100 km that are located the vineyards, in the Douro valley, is then transported to the Port to be aged and sold. Many cellars can be visited, with the right to taste several Port wines.

Monastery of Serra do Pilar

The Monastery of Serra do Pilar, maintains the interesting church and cloister built in 1538, circular, a replica of the church of Santa Maria Redonda in Rome, a unique example in Portugal. In 1832, during the Siege of Porto, the monastery was converted into an improvised fortress.

It became a military barracks in the early twentieth century, and is currently under the responsibility of the Artillery Regiment of the Serra do Pilar. Appreciate the beautiful landscape from the belvedere located in front of the church to observe the city of Porto and the river Douro .