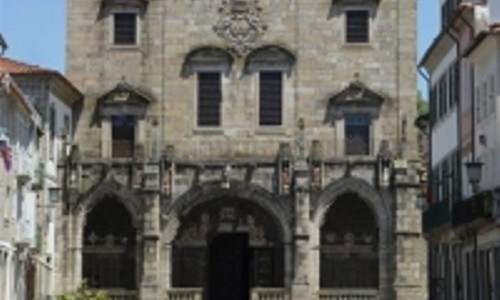 To happen in Braga !!

What to visit in Braga

Architectural-landscape complex integrated by the sanctuary, staircase where the sacred road of Bom Jesus is developed, Bom Jesus park and a funicular, Bom Jesus Lift.

In the year 1373 a hermitage is already mentioned in the place, in 1494 a second hermitage was erected and in 1522 a third one by initiative of D. João da Guarda, Dean of the Cathedral and Braga.

It is a public garden of the city, next to the Medieval wing of Paço Episcopal Bracarense. In the center there is a 17th century fountain topped by the statue of Santa Bárbara, hence the name of the garden.

Source of the Idol

It is a fountain of water with inscriptions and carved figures that indicate to be a sanctuary, constructed at the beginning of century I. Near the fountain were found architectonic vestiges that indicate that the sanctuary may have been part of a temple. It is one of the sites of the ancient Roman city most publicized due to its unique nature.

Hours: Tuesday to Friday from 09h to 12h and from 14h to 17h. Weekend from 11am to 5pm. Closed on Monday and Public Holidays

They are the ruins of a public bathhouse with an attached theater, built at the end of the first century, next to the Forum of the ancient Roman city.

It was what remained of the Castle of Braga, demolished in 1906. The tower is in the center of the city and is only open to the public when there are exhibitions.

The door was built in 1512 to connect the medieval village to the exterior of the walls during the expansion of the city. It was the last door to be opened on the city walls. The arch was built in 1772.

Arcada da Lapa or simply The Arcade, is located in the heart of the city. It was built in 1715 to form a small covered building where the merchants, who were going to the city, negotiated their products.

Between 1761 and 1764 was built in the middle of the arcades the Church of Lapa, and can not have large dimensions since the Arcade was leaning against the medieval walls of the castle.

It is installed in the Palace of the Biscainhos built in century XVI (Baroque period). The museum presents to the public a series of spaces that give a view of the occupations, tastes and traditions of our ancestors of the nobility of the XVII and XVIII centuries, being able to visit the Atrium, the Noble Hall, the Showrooms, Oratory, Game, the Dining Room, the Stables, the Old Kitchens, and lastly, the gardens of the eighteenth century that unfold in a spectacle of artistic and environmental beauty.

Hours: Tuesday to Sunday from 10h to 12: 15h and from 14h to 17h. Closed on Monday and on the holidays of 1 January, Easter Sunday, 1 May and 25 December. Free admission on Sundays and public holidays in the morning

The building began in 1911 and ended in 1914, leaving Theatro Circo with a capacity for 1500 people and asserting itself immediately as one of the largest and most beautiful Portuguese theaters. The premiere was on April 21, 1915.

In 1999, Theatro Circo underwent deep restoration and spatial restructuring works that modernized it. The requalification also included the replacement of the original traces of the Salão Nobre, now released from the changes it has suffered over the years.

The reopening of Theatro Circo took place on 27 October 2006 and is now a reference in the artistic world, not only because it has one of the most charismatic showrooms in the country, but because the choice of its programming meets the criteria of quality and eclecticism.

I know of Braga

"Older than the Cathedral of Braga" is a popular expression that is used when one intends to define the antiquity of something, which corroborates how old the Cathedral is. According to tradition, the diocese of Braga was created in the third century; But history only confirms it from the year 400.

The current building is implanted on another religious building that possibly was the previous cathedral. The cathedral has two towers on the facade, which brings it closer to the great cat