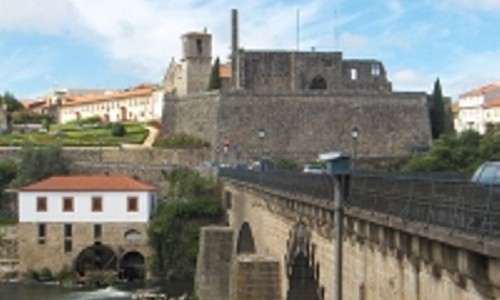 Barcelos is known as the Queen of the Portuguese handicraft and pottery. Find the uniqueness of its weekly market.

To happen in Barcelos !!

What to visit in Barcelos

Its construction began in the second half of the 14th century, by D. Pedro, Count of Barcelos, whose coat of arms remains engraved on its main door. In its architecture we can verify changes of style, from the Romanesque to the Gothic, and underwent several reconstructions from the 15th to the 18th centuries. It stands out for its 18th century tiles and the baroque golden chapels.

This fascinating octagonal church was designed in 1704 by the architect João Antunes and opened to worship in 1710. Inside it can admire a baroque style with colorful mosaics depicting the last days of Jesus. We can visit this symbol of the Barcelense culture in Largo da Porta Nova.

Church of Our Lady of the Rosary

This church, located in the Avenue of the Combatants of the Great War, was part of an old Benedictine Monastery dating to the eighteenth century. Its importance is due to Baroque art, which can be seen on the walls, covered by mosaics of tiles depicting the life of St. Benedict, the work of António de Oliveira Bernardes, an authentic master of the eighteenth century.

The Archaeological Museum of Barcelos is constituted by the ruins of what was once the palace of the Counts of Barcelos and Dukes of Bragança. At one end of the XIV century bridge located on the river Cávado, in the city of Barcelos. Destroyed during the 1755 earthquake is now outdoor archaeological museum. Here you can find authentic Roman columns and medieval sarcophagi, but the most interesting is a 14th century stone cross and a cruise known as "The Lord of the Rooster" which represents the man of the famous rooster legend.

The Museum located on Rua Cónego Joaquim Gaiolas, in the former Casa dos Mendanhas Cyrne Benevides, has a collection of more than 9 thousand pieces mainly by collections of Portuguese pottery matte and glazed (from North to South) and foreign (countries like Angola, Algeria, Brazil, Timor, Chile, Spain and Cape Verde). Its mission is the acquisition, research and dissemination of this important oleic heritage, as well as its preservation.

The traditional Barcelos fair held since 1412 is considered the oldest fair. It takes place every Thursday in this historic city located on the banks of the river Cávado. Located in Praça da República, it is an excellent showcase of local handicrafts and products.

It is a fourteenth-century building, dating from 1448, highlighting Manueline elements and characteristics. The building is a true testimony to the civil architecture of the aristocracy enriched by Portuguese discoveries and overseas trade. This building housed for many years the counts of Barcelos but now belongs to the Pinheiro family.

Built by Count D. Pedro, it was built between 1325 and 1330. It has five arches, in which the central arch is taller, typical of the bridges of the time. It is a Gothic building and connects Barcelos and Barcelinhos.

Part of the wall of the XV century worked from the 17th century until 1932 as a chain. The building since 2013 is used as Interpretation Center of the Rooster and the City of Barcelos.